If I had spaceship shaped confetti I would totally be throwing it everywhere right now!

My first ever science fiction, Deviation, has been released by Double Dragon Publishing. For right now I only have the publisher’s purchase link but as soon as it becomes available on Amazon and Barnes&Noble I’ll be certain to shove those links up everywhere.

Look at the pretty, shiny cover! 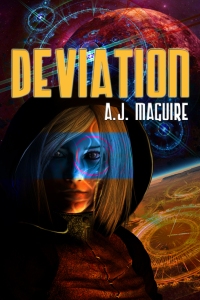 See the pretty shiny blurby thingy! (OK, so this is the longer version. You can see the shorter version everywhere else.)

On the brink of a religious war between Makeem and Novo Femina, Celeocia Prosser’s struggle for gender equality leads her to Reesa Zimms; the one woman in all of history who can identify the first Mavirus victim. Believing the information surrounding this patient zero to be pivotal in the fight against the Makeem, Celeocia sets her sights on Reesa Zimms, also known as Caresse Zimmerman.

There’s just one problem; Reesa Zimms is a science fiction novelist who lived and died hundreds of years in the past.

Utilizing wormhole travel and antimatter discs, Celeocia sends her son Hedric and the crew of the Lothogy careening through time. When Hedric finds Reesa, the novelist is accompanied by her best friend Kate, who just happens to look like his recently murdered wife.

Stunned and reeling, Hedric abducts both women, bringing Reesa and Kate on a not­so­gentle ride into the future.

Time travel might be easier for Reesa to accept because Hedric Prosser, the High Priestess, and the very ship they’re traveling on, all belong in Reesa’s novels. Confused and pretty sure she’s going insane; Reesa tries to prepare her friend Kate for the very male­dominated society they’ve been dumped into. When she finds herself abandoned by Hedric, Reesa must rely on Matthew Borden, the villain of her books, to rescue Kate and fight their way home.

Hear my squeal of delight to finally see this work out in the open!

No, seriously, Deviation and I have a rather long history. I started writing it in 2008 through Lazette Gifford’s Two Year Novel Course — which I highly recommend for anyone who has been toying with the idea of writing a novel but feels they don’t have the time.

I could blame this on the fact that I was in school for three of those years, but the truth is that I was just nervous. This is my first science fiction ever and I wanted to at least try to get it right.

Mars in particular was fun but I’ll make a whole post dedicated to Mars and all the things I broke while trying to make the planet habitable.

Today I’m throwing confetti and marveling at the artistic talents of my publisher and enjoying general revelry.