Witch-Born fans can rejoice today! (That’s right, I said “rejoice” because we really don’t use that word often enough these days.) The sequel and (likely) final chapter of the steampunk-magic-imbued saga has been released through Double Dragon Publishing.

Yes, yes, I know … “But you just had your first science fiction (Deviation) released last week!”

Quiet, mongrels! You’re not rejoicing like I told you to!

(I might be a little spirited today. The strap on my favorite purse broke and I am torn between grieving it and celebrating the new release. I apologize for any and all shenanigans.)

But no, seriously, Dead Magic is officially released. See its understated and quietly brilliant purchase link at the side of this post … Or if you don’t like sidebars you can follow this link to its brand new Amazon page. 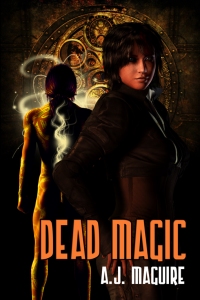 Why yes, that does appear to be a naked man in the background. See the tattoos? Witch-Born fans should automatically recognize them!

Bask, my lovelies, in the blurby thingy that must be placed on all books …

Return to the Steam Punk world of Magnellum for the second book in the “Witch-Born” series.

Magic is gone and Valeda Quinlan knows it, she just can’t prove it. Determined to learn the truth, Valeda finds herself at the mercy of Elsie Delgora, the last known Witch to have ever seen Magic. Scrambling for survival amidst the noble Houses of Magnellum, Valeda agrees to help Elsie in return for Magic’s location. But the help Elsie needs is more than Valeda bargained for. Sent on a mission to find Lord Winslow Agoston, Valeda is confronted by powers far beyond any Witch-Born and forced to take on an even larger role in the fate of Magnellum.

In all seriousness this book was a joy to write. I had fun with Valeda and Winslow and I sincerely hope everyone else will too.